From garage floor epoxy in your home to metallic epoxy flooring in businesses, our trusted team of experts are here to help you. Epoxy Flooring Kansas City is proud to serve the residents of Overland Park, KS, and the surrounding areas.

Epoxy Flooring Kansas City serves Overland Park, Kansas with only the best in concrete services. We specialize in epoxy flooring in Overland Park for residential and commercial settings, we also install other types of concrete coatings as well as stamped concrete and pool deck resurfacing. Our company comes to you with years of combined experience to ensure the highest quality results. Our service area includes numerous locations throughout Kansas and Missouri, including Overland Park.

While Overland Park is the second-most populous city in Kansas and the gateway to Kansas City, it still retains its small-town feel with the perks of a big city. The city is home to Overland Park Arboretum and Botanical Gardens, which is roughly 300 acres of beauty. The Oak Park Mall is one of the area’s popular shopping locations, consisting of almost 200 stores. This close-knit city has a lot to offer residents and tourists alike.

Overland Park follows its origins to 1905, with the arrival of its founder, William B. Strang Jr. who started building subdivisions along an old military roadway, which later became the city’s main street. On May 20, 1960, Overland Park was officially incorporated with a population of 28,085. Today, Overland Park is one of the most populated, successful cities in Kansas.

Epoxy floor coatings are as tough as they come and beautiful as well. With a myriad of colors and patterns available for you to choose from, the opportunities are limited only to your imagination. 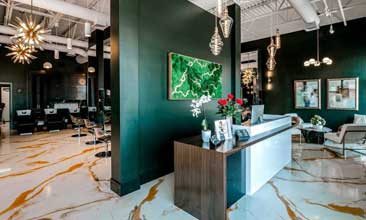 Metallic epoxy floor coatings are a brilliant way to transform any room into an incredible visual experience while providing the toughest protection. These concrete floor coatings are highly durable and can last as over 20 years when installed and maintained properly. The patterns and colors available are practically endless. Metallic pigments are mixed into the epoxy to create vivid patterns that can replicate scenes from nature such as fiery lava or the ocean’s flowing tide. The metallic pigments can also be swirled to make one-of-a-kind creations that can’t be duplicated. Rest assured that your new floor will be yours alone. 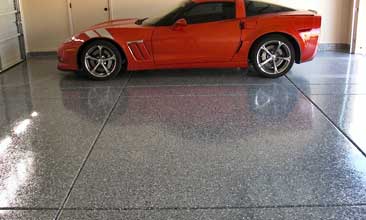 Epoxy flooring can be an excellent choice to coat your garage floor. No matter the look you’re going for in your garage, from showroom to workshop, we can create a space that you can be proud of with epoxy. Epoxy flooring can be finished with a glossy sheen to create that showroom feel. On the other end of the spectrum, we can install a decorative flake epoxy to give some added slip resistance to a garage that you plan on working in regularly. Epoxy is highly resistant to a variety of chemicals, including car chemicals like oil and gas.

There’s nothing a thriving commercial business needs more than a durable, long-lasting floor. That’s where we come in! We can coat the concrete floors of your business in hard epoxy to create a long-lasting floor that’s as beautiful as it is tough. Many companies set their business apart with their brand’s colors. We can incorporate your brand’s colors on your epoxy floor in a pattern that suits your business perfectly. Epoxy can easily withstand the high volume of traffic that accompanies a commercial business and the simple maintenance makes it the perfect choice for your commercial property. 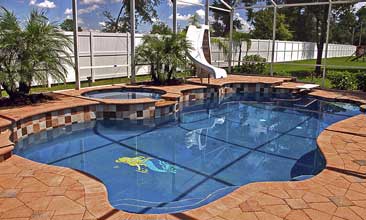 If you’re tired of your faded, worn pool deck, don’t waste the time and money on a complete replacement. Tearing out your existing concrete is an overly expensive process that isn’t necessary. From concrete overlays to pavers we can breathe new life into your pool deck with the most affordable prices in the area. When your pool deck begins to fade or crack, it can become a danger to yourself and your family. Cracks can create trip hazards and the faded finish will absorb more heat, resulting in burnt feet. Don’t let your pool deck become a hazard, resurface it today! 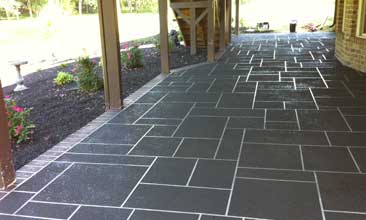 We offer a large selection of durable floor coatings for nearly any residential, commercial, or industrial application. From premium polyurea to affordable epoxy, our floor finishing solutions offer the ideal combination of heavy-duty strength and customized style. With a quick installation time, we can bring you all the benefits of concrete coatings including durability, slip resistance, chemical resistance, and UV resistance. Leaving your concrete bare can lead to accidents, costly repairs, and premature replacements. Our team of skilled concrete contractors is always ready to provide top-quality concrete coatings to both our residential and commercial clients 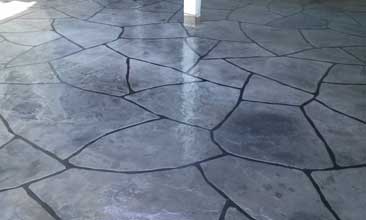 If you’re looking to spice up your concrete surfaces, stamped concrete is definitely the way to go. Stamping concrete is an exceptional method to achieve the high-end look that comes with many other, more expensive materials such as brick and natural stone. By stamping your freshly poured concrete or concrete overlay to mimic these surfaces, you can save money while receiving the plethora of benefits afforded by concrete. There are numerous stamp patterns to choose from, including cobblestone, brick, and slate. When properly sealed, your stamped concrete surfaces will last for decades!

GET IN TOUCH WITH US AND OUR REPRESENTATIVES TODAY! WE WOULD LOVE TO ANSWER ANY UNDERLYING QUESTIONS THAT MAY ARISE
Get A Quote

You should never settle for less than the best!

We understand that when it comes to epoxy floor coatings and concrete services, you have plenty of choices in the Overland Park area. This is why we put everything we have into our top-quality craftsmanship and customer service. We’re licensed, bonded, and insured to give our customers the peace of mind that they deserve. Our team of trained professionals has been thoroughly vetted to ensure that you receive nothing less than the best! We’ve got years of combined experience between us that shows in every project we complete. You deserve the best in the business and that’s what we strive to be.