From concrete sealing and stamped concrete to epoxy flooring and other concrete coatings, our experienced contractors can do it all. Speakman Coatings & Floor serves Kansas City, MO and surrounding areas with a dedication to superior materials and quality workmanship.

Speakman Coatings & Floor serves Kansas City, Missouri with reliable and high-quality concrete services. Specializing in epoxy flooring in Kansas City for residential and commercial applications, we also install other types of concrete coatings as well as stamped concrete, waterproofing, and sealing with more than 19 years of experience. Our large service area includes many communities throughout Kansas and Missouri, including Kansas City.

Kansas City may be the largest city in Missouri but it maintains its small town charm with its distinctive neighborhoods like the River Market District, well-known Kansas City barbecue, craft breweries, and jazz music. Located on the Missouri River, the city got its name in the mid-19th century when it was a boom town known for its many attractions. About twenty years after Kansas City, MO was incorporated, several towns in nearby Kansas joined together to form Kansas City, Kansas, using the same name to piggyback on the success of their Missouri neighbors.

Epoxy floor coatings are a cost-effective and resilient solution to protect and beautify your interior concrete floors. Beautiful enough for your basement or garage yet strong enough for even the harshest industrial settings, epoxy flooring in Kansas City is a smart investment for any application. 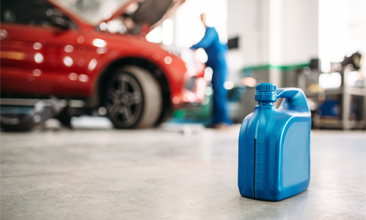 One of the most popular uses for epoxy flooring in Kansas City is a garage epoxy coating. An epoxy garage floor coating in Kansas City, MO delivers a robust yet decorative surface that stops concrete dusting for good.
Our epoxy garage floor installers use only high-grade 100% solids epoxy for results that can last up to 20 years without showing wear and tear. Garage epoxy can withstand all types of abuse, including hot tire pick up and oil spills, with a bright and seamless surface that’s easy to maintain. 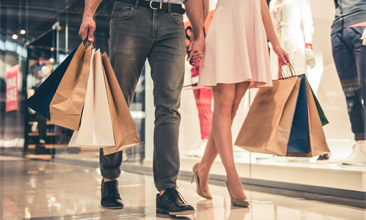 Commercial and industrial facility managers love epoxy floor coatings because they’re robust, safe, and offer a low lifecycle cost. A commercial epoxy floor system is seamless and nonporous for easy maintenance.
The appearance of your epoxy can even be customized to improve safety with striping or add a decorative touch for public areas of your facility. Our commercial epoxy flooring contractors in Kansas City use premium epoxy materials rated to withstand chemicals, solvents, heavy loads, vehicle traffic, and other hazards. 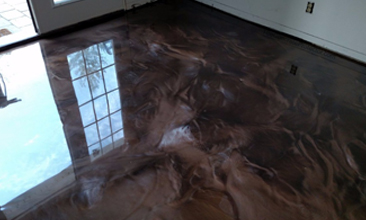 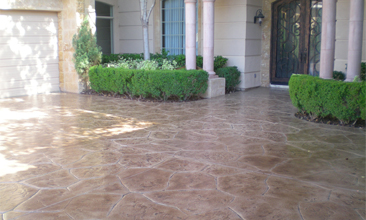 Whether you want to give existing concrete a new look and feel or you want the look of a luxury material when pouring new concrete, stamped concrete in Kansas City is a great investment.
A stained, stamped concrete overlay on existing concrete can give you the look of wood planks, pavers, brick, natural stone, and more. This technique delivers the realistic color and texture of a premium material at a fraction of the cost and without the special care that natural stone and wood requires. 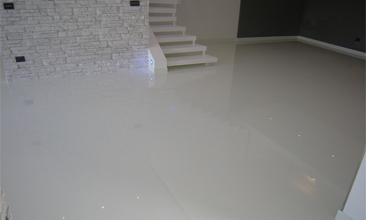 Basement waterproofing and general concrete sealing are protective services to improve the performance of your concrete. A specialized concrete coating can transform your basement from musty to clean and liveable by preventing moisture from seeping through the concrete.
Concrete cleaning and sealing can extend the life of your concrete by helping it resist damage from moisture, freeze-thaw cycles, road salt, and automotive fluids. We recommend sealing new concrete to protect it from damage. Existing concrete should also be cleaned and sealed to brighten its appearance and improve long-term performance. 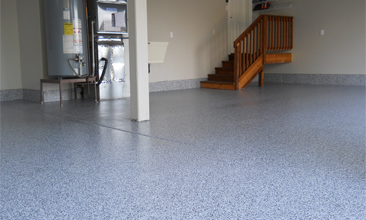 Concrete epoxy coatings aren’t the only option for covering and protecting a concrete surface. A rubberized floor coating in Kansas City is a good choice if you need a completely waterproof and weatherproof surface. Rubber floor coatings can be installed in garages, industrial environments, and even outdoors in a range of textures and colors. We also install epoxy slurry systems. These self-leveling coatings offer commercial-grade resistance to thermal shock, impact, and chemicals with a combination of epoxy and graded silica or slurry powder.

GET IN TOUCH WITH US AND OUR REPRESENTATIVES TODAY! WE WOULD LOVE TO ANSWER ANY UNDERLYING QUESTIONS THAT MAY ARISE
Get A Quote

Trust your concrete to the Kansas City professionals

We know you have many options when it comes to epoxy floor coatings, concrete sealing, and stamped concrete in Kansas City. That’s why we strive to be the best.

Speakman Coatings & Floor has more than 19 years of experience working with concrete and epoxy products with a dedication to delivering the best in performance and customer service.

Our work is always backed by our 3-year guarantee for residential work and 1-year for commercial projects. We use only the best products such as 100% solids epoxy to deliver dependable results that last without premature failure or delamination.